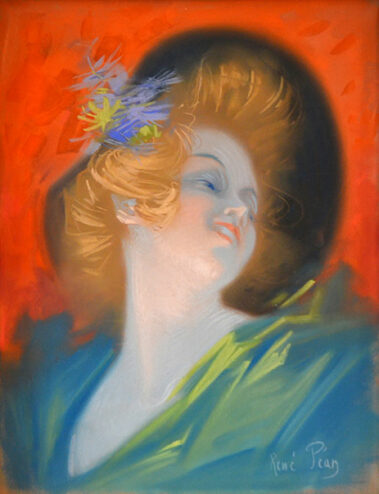 René Péan, born in Paris on 1 July 1875 and died in Ermont (Val-d’Oise) on 4 September 1946. Péan was a French painter, poster artist and illustrator. Student of the famed Jules Cheret. He flourished between 1895 and 1905 in the workshop Chaix creating many posters for the entertainment and leisure fields. His family was originally from the Sarthe and had settled in Paris at the beginning of the Second Empire. In 1889 he was apprenticed in the studio of Jules Cheret. After 1881, he remained until 1910, the Imprimerie Chaix, at 20 rue Bergère. In 1891, he studied lithography at the School of Decorative Arts in Paris.

Péan was the friend of Alfonse Mucha. At Chaix, where he had colleagues Lucien Lefevre and Georges Meunier, he produced an abundance of posters for the theater, tourism, department stores, and modern manufactured goods. He created 150 posters between 1895 and 1913. They depict young women smiling and elegant or landscapes and monuments described with almost photographic precision. Two of his productions have been reproduced from the boards of Masters of Poster: Instead Clichy (1898) and In the Three Neighborhoods (1899).

Péan also drew for the press in newspapers such as The Smile, The Illustration and The Ramp. The war marked a break in his career. After 1920 his poster production is much less important. However, he then created works for advertising purposes in the form of chromolithography representing girls in three-quarter views. Hairstyles vary: Harlequin, Columbine or au beret.