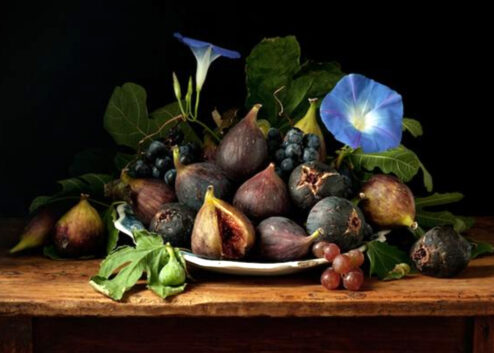 Paulette Tavormina lives and works in New York City. Amidst the bustle that
defines the city, she can often be found at one of its many farmer’s markets
searching for the perfectly imperfect flora that characterize her photographs.
Her arrangements often recall the sumptuous detail of seventeenth century
Old Master still life painters and serve as intensely personal interpretations of
timeless, universal stories. With a painterly perspective reminiscent of
Francisco de Zurbaran, Adriaen Coorte and Giovanna Garzoni,
Tavormina creates worldly still lifes.

Tavormina’s photographs are in museum, corporate and private collections
and have been exhibitedin Paris, London, Moscow, Lugano, New York, Los
Angeles, Miami, Boston and Chicago. Tavormina, who is largely self-taught,
currently photographs works of art for Sotheby’s and works as a commercial
photographer. She has collaborated with The Fabulous Beekman Boys on
multiple projects, including the critically acclaimed The Beekman 1802
Heirloom Cookbook. Previously, Tavormina was a prop and food stylist in
Hollywood, her work seen on the silver screen in films such as Nixon and
ThePerfect Storm.