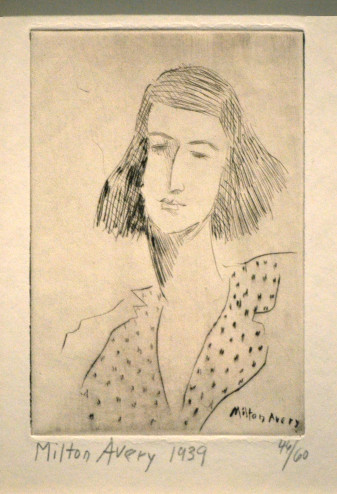 Born in Sand Bank (now Altmar), Ct, March 7, 1885. Milton Clark Avery began his artistic during his teenage years and painted almost daily until two years before his death in 1965. He later grew into a masterful American modernist.

He left school at the age of sixteen to work at the Hartford Machine and Screw Company and the Underwood Manufacturing Company in Connecticut assembling machine parts to support his family. Known as a colorist focused on serene mood, harmony, and rounded shapes, Milton Avery was primarily a self-taught painter whose work combining abstraction and realism suggests dialogue between line, shape, muted color, and subdued emotions. Most of his subjects were either marine scenes or figure studies. Although never associated with a particular movement, Avery was a key modernist who influenced succeeding generations of artists.

Rosalie is a mystery girl. She appears to be about age 14 and has an innocence about her that is unmistakable. Her dress is right out of the 1930’s from whence she came. Avery has captured her loveliness and with well-edited gestures.