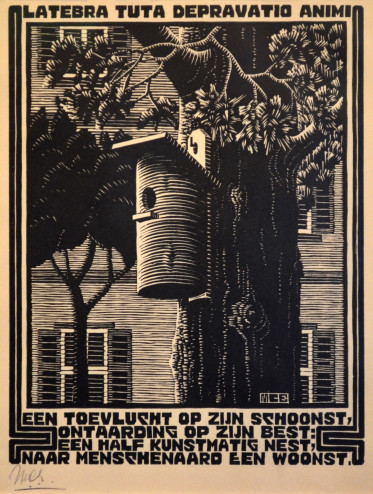 Maurits Cornelis Escher is one of the world’s most famous graphic artists. His art is enjoyed by millions of people all over the world, as can be seen on the many web sites on the internet.

But he also made some wonderful, more realistic work during the time he lived and traveled in Italy.

Castrovalva for example, where one already can see Escher’s fascination for high and low, close by and far away. The lithograph Atrani, a small town on the Amalfi Coast was made in 1931, but comes back for example, in his masterpiece Metamorphosis I and II.

M.C. Escher, during his lifetime, made 448 lithographs, woodcuts and wood engravings and over 2000 drawings and sketches. Like some of his famous predecessors, – Michelangelo, Leonardo da Vinci, Dürer and Holbein-, M.C. Escher was left-handed.

Apart from being a graphic artist, M.C. Escher illustrated books, designed tapestries, postage stamps and murals. He was born in Leeuwarden, the Netherlands, as the fourth and youngest son of a civil engineer. After 5 years the family moved to Arnhem where Escher spent most of his youth. After failing his high school exams, Maurits ultimately was enrolled in the School for Architecture and Decorative Arts in Haarlem.