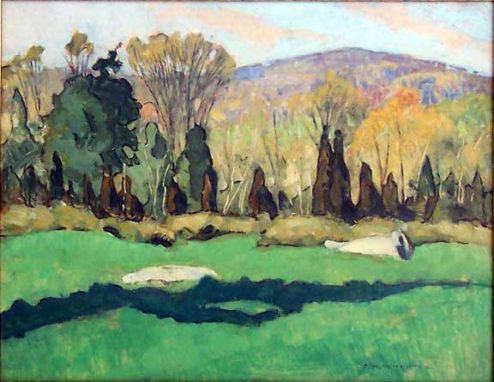 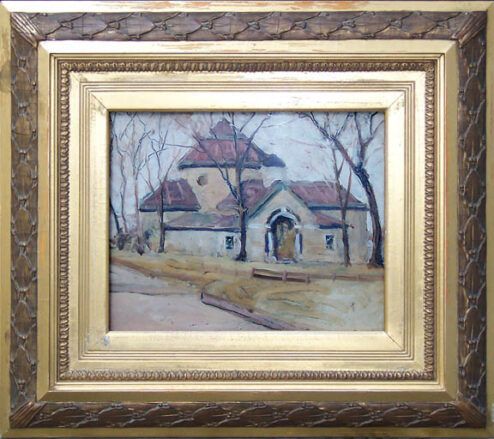 Born in Bradford, England, Joe Wheater came to America with his parents at a young age, initially settling in Cambridge, MA. A few years later, the family moved to the City Point section of South Boston, MA near the water and yacht clubs.

In May, 1904, at age 19, he sailed alone to England from Boston on the S.S. Saxonia staying in Bradford, England with aunts, uncles and cousins for about 3 months. During his extended visit, he painted and drew scenes of Bradford and neighboring towns. He returned in September with over 120 sketches and watercolors as well as many snapshots.

As a young man, he worked designing steam boat whistles. In his early 20’s, Joe Wheater enrolled at The Fenway School of Illustration. He later studied under Henry W. Rice, who was a well known Boston water colorist. Rice had a studio in the Fenway area of Boston.

In or about 1915-1916, Joe Wheater became a reference artist for a motion picture company in New Jersey. He stayed at an artist colony in Leonia, N.J., with artists who became quite famous, notably Dean Cornell, Charles Defeo Harry Ballinger and many others.

While working in NJ, he took a few night courses at the Art Students League in New York City. Joe Wheater returned to South Boston when his father died. He lived with his mother and never married. His mother passed away about 1935 or 1936. Wheater lived at that address near the Yacht Clubs until he died in 1959.

This biography is from the archives of AskART.com.
Submitted by Cindy White on behalf of Joseph V. White (father-in-law) who was Mr. Wheater’s friend, neighbor and landlord for many years.