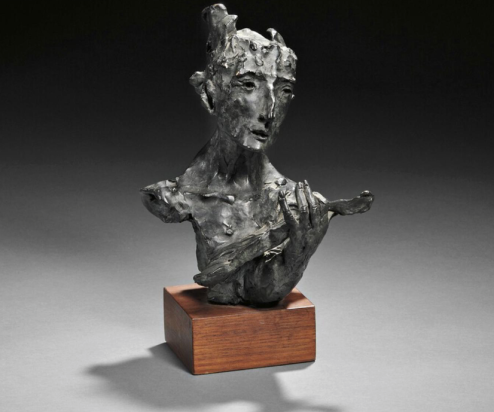 David Aronson was born in Shilova, Lithuania in 1923 and immigrated to the United States at the age of six. David Aronson, an Expressionist artist whose vivid paintings, charcoal drawings and scuptures captured the tension between his Orthodox Jewish upbringing and the biblical injunction against making graven images. A leader, with Hyam Bloom and Jack Levine of the so-called Boston Expressionist movement, Mr. Aronson was influential as both a painter and a professor. He has lived and worked in the Boston area for nearly sixty years. While receiving his diploma at the School of the Museum of Fine Arts, Boston, Aronson studied with the innovative, German-born artist Karl Zerbe. In 1955, he was invited by Boston University to direct the emerging visual arts program, which has now become the College of Fine Arts. Subsequently, in 1958 Aronson established the Boston University Art Gallery and was appointed a tenured Professor of Art in 1962. Aronson’s reputation as an internationally recognized painter and sculptor was quickly established and his work has continued to be exhibited with numerous solo exhibitions in Chicago, Philadelphia, New York, Los Angeles and Tokyo, among others. His work is represented in over forty museums worldwide. In addition to his exhibitions, Aronson has received numerous awards and honors, including a Guggenheim Fellowship, election as Academician at the National Academy of Design, New York, and an Honorary Doctorate of Humane Letters from Hebrew College, Newton, Massachusetts. His collections have been showcased in over 40 museums across the world.