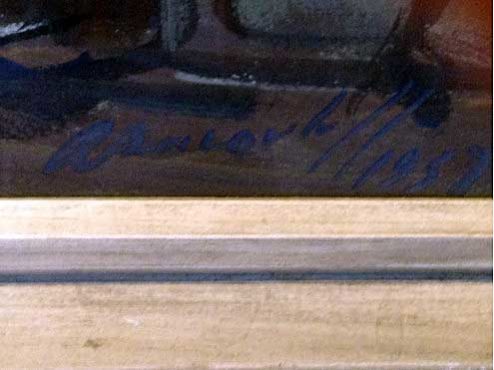 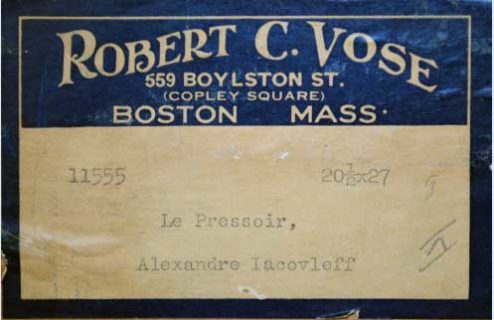 Alexander Evgenyevich Yakovlev was born into the family of a naval officer. He received artistic education in the Petersburg Academy of Arts (1905-13), where he studied under Dmitry Kardovsky. At that time already, Alexander Yakovlev was fond of graphic art and started contributing to art logs as a graphic artist. His pictures appeared in the Apollo, Satyricon, New Satyricon, and Niva.

The artist started participating in exhibitions from 1909. His large group portrait At the Academic Dacha (1912) shown at the Baltic Exhibition in Malmoe (Sweden) was highly appreciated by Alexander Benois.

In his academic years, the artist became a bosom friend and creative collaborator of Vassily Shukhayev. Their contemporaries jokingly called them twin artists.

After a short-time infatuation with impressionism in his student’s years, Alexander Yakovlev resorted to classical art for inspiration. His competitive works Bathing and In the Russian Baths (both 1913) showed the young artist orientation to the art by old masters. His inclination to Neoclassicism could be seen in them already. These works gained him the artist’s title and a grant for a creative trip abroad. From 1913 to 1915 he lived and studied old painting in Italy. Afterward, the artist visited the island of Majorca in Spain. Read More

Along with a great number of life etudes the artist painted in Italy his self-portrait as Harlequin. It became an integral part of the famous double self-portrait of Vassily Shukhayev and Alexander Yakovlev. The artists considered this painting one of their most significant works. Alexander Yakovlev depicted himself wearing theatrical make-up and a bright costume designed by the artist N. N. Sapunov. The portrait’s theatricality goes hand in hand with the old art arsenal: exact drawing, sculptural molding of the form, local color, and some primitivism rooted in the Russian lubok (popular print). Elements of stylization, imitation of the Italian Renaissance or primitive art are noticeable in his other works as well, for example in The Violinist (1915).

This and some other works created in Italy were displayed by Alexander Yakovlev at the World of Art association’s exhibition upon his return to Petrograd in 1915. They stirred great controversy. The council of the Academy of Arts, in particular, did not accept his paintings. In the second half of the 1910s,​ Alexander Yakovlev was engaged in portrait painting and graphic art, having made great progress in sanguine drawing. The most considerable works of that time are the Portrait of Kazaroza (the artist’s wife) (1916) and Self-Portrait (1917), as well as graphic portraits of Fyodor Shalyapin and Nikolay Radlov.